On Monday (11th of November 2019) the current British ambassador, his Excellency Mr. Iain Lindsay visited our school. Surprisingly,  he started his remarks  in Hungarian, not English.

He learned our difficult language with the help of several courses and not only does he speak Hungarian but also Japanese, Romanian and French, too. He is originally from Scotland and he listed some important aspects of the Scottish-Hungarian relationships of it with Hungary, for instance how the Clark brothers designed and constructed the Chain Bridge in Budapest and that St. Margaret, one of the saints of Scotland, was born in Hungary.

Mr Lindsay became a diplomat in 1980 having completed his university studies intent on travelling the world. We can say that he did just that. He worked and lived in Japan, Hong Kong, Australia and Romania. He was appointed ambassador to Hungary in 2016. He told us that it was after the change of regime in Hungary that the strength of the relationship between the UK and Hungary became a major interest, only 30 years ago. Mr. Lindsay said that he thought that it was important to learn about the country he lived in, about its culture, history and people. Mr. Lindsay met people during his stay in Pécs and Debrecen  and he also works with a lot of Hungarians in the Embassy.

He loves living here and all the Hungarian people. He visits Sziget as many British artists perform there annually and because he loves EDM he has been to Balaton Sound too. He also loves Hungarian cuisine: his favourite is probably the Eszterházy cake and he also likes our wine. He said we are lucky to learn more than one foreign language and studying subjects not just in our mother tongue.

During the lecture we laughed a lot of times, for example when he told us stories about how he is puzzled by different languages sometimes. As Szeged is the city of sunshine and Juhász Gyula, he recited from one of his poems a few lines.

I think it is thoroughly amazing how passionate he is about getting to know our country better. He likes the weather here too because in Scotland it is always quite cold. He earned the title of Officer of the Most Excellent Order of the British Empire (OBE) too. After answering our questions, he wished us luck and we took a selfie with him too!

Ivett Sipos, a photographer of iDeák took some pictures during Mr. Iain Lindsay’s speech. You can view them by clicking on the link below. 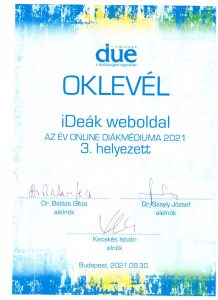